Invest like Buffett? How many times have you heard that one? 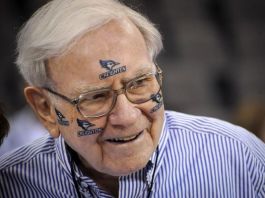 Buffett recently released his annual shareholder letter for 2013, for his Berkshire Hathaway holding company, and one key tenet is his optimism for the U.S. economy. Once again, his yearly missive to his shareholders shows how simple the keys to his success are. He wrote that he believes “a ‘bet’ on ever-rising U.S. prosperity to be very close to a sure thing.”

More specifically, how does he deliver those wonderful returns?

• The first point to take from the letter is to invest well. You start by analyzing and understanding business performance and fundamentals. Conversely, completely ignore anything about charting and graphics of market performance, as they are sold by services that feast on the uninformed.

• Second, if you don’t have the time, patience, knowledge or the will to research individual assets, a simple cost-effective approach is to buy low-cost index funds.It is an easy alternative, and you can get exposure and diversification to the equity markets through these simple instruments.

• Third, Buffett and his partner, Charlie Munger, typically think about consistency of results for a long period, usually greater than five years. Businesses capable of routinely growing revenues and profits are what you want. There’s a caveat: In many cases, you want the growth rates to not be too extreme. If businesses grow too quickly, the question is how sustainable the performance can be.

• Fourth, do not pay attention to macroeconomics, market predictions or broad-based negative market sentiment. Ignoring such background noise is necessary because it helps you buy assets at attractive prices. You focus on what you are buying, not on cosmic forces beyond it.

• Fifth, a big and harmful temptation for individual investors is activity, or buying and selling too frequently. If you own high-quality assets, let the companies’ business strength and growth reward you. They do so through stock buybacks, increasing dividends, purchases of other companies or internal growth. It is not necessary to constantly have to do something, like trade your holdings constantly, to have good investment success
.

• Finally, in reading Buffett’s letter this year, you are struck by the generally pleasant and helpful attitude he has toward his readers, namely his shareholders. He tries to get them good deals from companies he owns, gives suggestions for travel and lodging to make them more affordable and really goes out of his way for people in general.

Not everyone has his billions, which allows the Oracle of Omaha to snatch up deals unavailable to most of us, like his 2009 purchase of Burlington Northern Santa Fe railroad.

Not that they are easy to implement. Diligence, grit and common sense are prerequisites to coming anywhere near a winning investment performance long term. He is doing something right, and consistently. According to Forbes, Buffett is the second-richest American, with an estimated net worth of $58.5 billion (Bill Gates is No. 1).

When a person starts with $100,000 dollars of capital, only $100 of which is his own, and turns it into a $309 billion empire nearly 50 years later, principally by investing, pay heed. Numerous biographies show how Buffett started early and stayed at it.

You may completely disagree with his political views – he has urged Congress to raise taxes on the wealthy, for instance – and also think he benefited from inside deals during the market problems in 2008. Back then, when Wall Street teetered on the brink, he invested $5 billion in Goldman Sachs, to shore up the firm right after the collapse of Lehman Brothers. The deal was on very favorable terms to Buffett, and last fall, he reaped $2 billion from it. This kind of transaction is not within reach for most of us.

However, there can be no doubt his accomplishments as an investor are unparalleled and probably will not be matched.